How marketing can go wrong in social media – Another hashtag failure

How marketing can go wrong in social media – Another hashtag failure

Many companies have tried to promote their products on Twitter … and have ran into a problems. This is a story of how marketing goes wrong in social media due to lack of a tiny bit of research.

Burger King began well, with the deployment of giant crinkle-cut french fries in urban areas of major cities. This led to some photo postings in social media and drove some curiosity about the chain’s chosen Twitter hashtag, #WTFF, meant to stand for “What the french fry.” But here’s the problem: It turns out #WTFF is a hashtag already in common use as standing for something else. It stands for What The F*ing F*k:

This has caused an amusing jumble on the #WTFF Twitter hashtag thread. Quite a few #WTFF posts are about the fries – though many of those have been posted by Burger King – and many others are about random unrelated things that makes people “unhappy”: 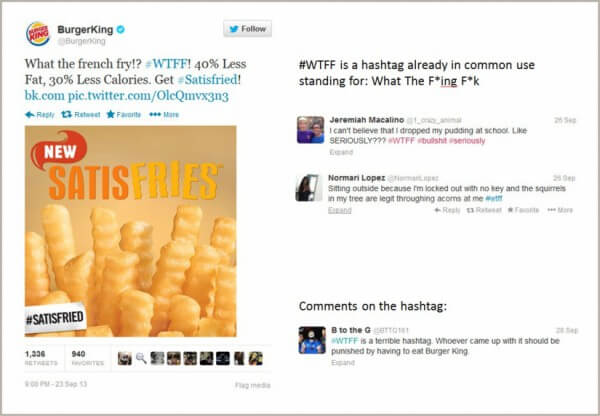 A bit of internet research probably could have prevented this. But now they’re stuck with their tag, as it’s on the giant fries their minions are toting around major cities.

Not long back, McDonald’s attempted to build social media buzz for its brand with a #McDStories hashtag, with the result that most tweets at #McDStories were derogatory.

Short URL & title:
How marketing can go wrong in social media – Another hashtag failure — https://www.torbenrick.eu/t/r/gbv
Share it:
If you enjoyed this article, please take 5 seconds to share it on your social network. Thanks!