There is no brand immune to a negative event

There is no brand immune to a negative event … it happens, that’s life and most companies plan for this to happen by developing action plans and the like. However, it is possible to think BP forgot to let their PR team into this idea.

It was not too long ago we had the case of Dell catching all the negative press when the batteries in its laptops overheated and caught fire.

But in terms of bad online sentiment, it doesn’t get much worse than BP’s continuing disaster in the Gulf of Mexico.

A search for “BP oil spill” on YouTube returns over 900 videos about the disaster and last week BP was one of brands that was generating the most buzz on Twitter.  BP seems to have a poor micro-blogging strategy and each twit is drowned by a deluge of hostile Tweets. This is partly just a question of quantity, which could be balanced if BP had a larger presence on these sites and more followers to begin with – but since it’s too late to do anything about that, the company might benefit by at least putting a more human (and humane) face on its social media communications.

Lets see the CEO make some personal twits – a symbolic gesture which might help temper the maelstrom of negative PR currently engulfing the company. Or even better – lets see the CEO apologize in a video broadcast. Like the video from KLM’s President and CEO Peter Hartman about the unprecedented ash crisis in Europe.

Without prompt action, we can expect the online communities to pick up hostilities and this will become an offline issue. T-Shirts are now being sold online to bolster the pressure on BP and reinforce the negative aspects of this disaster.

Could that have been mitigated? It’s hard to say given the scope and scale of this incident. It certainly couldn’t have hurt to have fans, followers and plans to communicate. 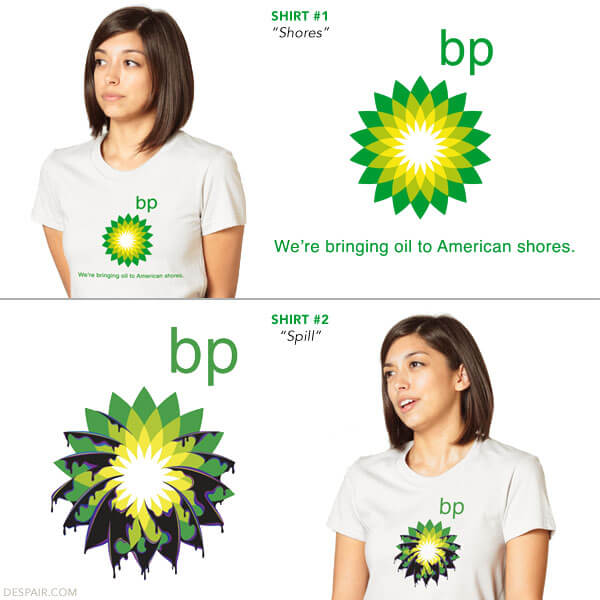 Social media can be a powerful crisis management tool

Social media is a powerful crisis management tool, but only if you have been using it when you are not in crisis mode too:

It would be incredibly challenging to try and mitigate the backlash that’s happening with BP now. Great article Torben.

Setting policies and procedures for how employees are expected to communicate online is a good start.