How not to handle a social crisis

How not to handle a social crisis

Food giant Nestle, already under pressure from environmentalists, became the subject of a Facebook- and Twitter-based “twitstorm” when the operators of the corporation’s Facebook page took a hostile approach to critics. 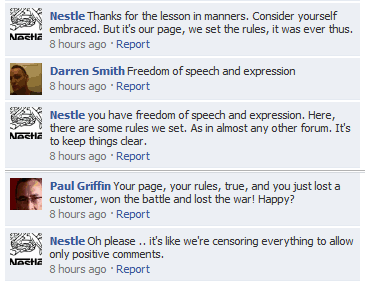 Environmental activist group Greenpeace has long been putting the pressure on Nestle to stop using palm oil, the production of which has been documented as a source of deforestation, greenhouse gas emissions, and endangered species loss. A provocative new Web video campaign on behalf of Greenpeace’s U.K. arm targeted the food manufacturer as a threat to the livelihoods of orangutans, and according to Greenpeace, Nestle lobbied to have the video removed from YouTube, citing a copyright complaint. Cue plenty of free press for Greenpeace.

Greenpeace supporters – whom the activist group had encouraged to change their Facebook profile photos to anti-Nestle slogans that often incorporated one or more of the company’s food logos – started posting to the Nestle fan page en masse. Nestle countered with a mild threat: “To repeat: we welcome your comments, but please don’t post using an altered version of any of our logos as your profile pic – they will be deleted.” A Nestle rep diving into the comments of the thread with responses like “Oh please…it’s like we’re censoring everything to allow only positive comments” didn’t calm things down.

Reactions on the page ranged from “Hey PR moron. Thanks you are doing a far better job than we could ever achieve in destroying your brand,” to “It’s not OK for people to use altered versions of your logos, but it’s OK for you to alter the face of Indonesian rainforests? Wow!” to a gentler “I like some Nestle products so I qualify as a ‘fan.’ I would like Nestle to make them even better by removing palm oil. I would like to enjoy my Kit-Kats without feeling responsible for rainforest destruction and orangutan deaths.”

Intel was attacked by activists opposed to minerals mining in the Congo inundated Intel’s Facebook page.

They wanted Intel to pledge its support for a congressional bill that would restrict the import of “conflict minerals” that contribute to fighting in the war-torn country.

Supporters of the bill dominated the discussion on Intel’s Facebook page, with dozens of critical comments – many of them identical.

It was all part of a grassroots campaign using Facebook in a new way to get support for the bipartisan Conflict Minerals Trade Act that is making its way through Congress.

Intel shut off discussion on its Facebook page and told its audience:

Closing comments set off howls of protest and Intel had to apologize:

Putting aside all judgment on who’s right and who’s wrong in these situations, we are seeing the dark side of the Facebook fan page. Any company that maintains a Facebook page should learn from Nestle’s and Intel’s mistake.

Short URL & Title:
How not to handle a social crisis — http://www.torbenrick.eu/t/r/ghm

Good points Torben, what do you think we should learn from these examples? What is the “law of unintended consequences” here?

Interesting that some of Nestle’s competitors manage not to use Palm Oil without problem as we found out to our pleasant surprise.

we vote withg our feet on this issue, wee simply refuse to buy products with it in …. corporations think they’re big and strong, until they do a Ratnor’s or a Vista ! Nestle is getting very close to this point.